Short Answer: In California, you can sell your gun to anyone that is legally allowed to own it and as long as the sale of the gun is processed by a business or individual that has a Federal Firearms License.

Where can I sell my gun?

This question has two parts – finding a buyer and transferring ownership.

Finding a Buyer for my gun

The first part, finding a buyer depends upon what your goals are for your gun:

If you are looking to sell the gun quickly and don’t care much about what price you get, a local gun shop or pawn shop is your best place. Just make sure to call ahead and find out if they buy guns and a good time to visit. Inspecting and reviewing a gun for sale will take a little bit of time – so plan ahead.

If you end up selling the gun to the gun store or pawn shop, most transactions can take place same day. Again, call ahead to avoid long wait times.

Virtually all gun stores and pawn shops (that deal with guns) are FFL dealers. As long as the business has a legitimate storefront and isn’t being run out of a storage shed or mobile vehicle, it is safe to assume they are a valid FFL dealer.

However, if you want to check, you can always verify a FFL dealer with the U.S. Government Department of Alcohol, Tobacco and Firearms at https://fflezcheck.atf.gov/fflezcheck/.

Option 2: Sell my gun to a friend or relative

If you want to sell or transfer your gun to a specific individual, you will be able to do so with a Private Party Transfer (PPT). This type of sale requires the buyer to pass a background check and the process to be conducted by an FFL dealer for a nominal fee (usually about $40 for all government fees).

With this option, call ahead to a gun store or pawn shop and let them know the guns you are wanting to bring in. It’s helpful for both the seller and buyer to be present for the first meeting if you want to get the process started. Each person will need to bring government photo identification and a second proof of identification – such as gas bill, electric bill or auto registration …and the address on the second ID must match the photo government issued ID.

Option 3: Sell my gun for the most amount of money

Consignment is almost always the best method to get the most money for your gun. This process is not quick, but if you have a reasonable price for your gun, it should sell without too much of a wait. At ASK, we have collectors, hobbyists and professionals continually asking for used guns.

Consignment is the easiest way to plug into a network of eager, legal gun buyers without worrying about complying with laws for properly advertising your gun.

Most gun stores and pawn shops offer consignment and charge a percentage of the sale for the value of marketing your gun to their customer base.

If you want to sell your gun and time is not a big factor, consignment is the easiest method to get the most value. Just call ahead and make sure to come by at a convenient time.

What is my gun worth?

Finding out what your gun is worth requires a little bit of research. We recommend looking online at a few different websites which have guns for sale and auction. This will provide a good idea of what price your gun might reach. Here is a list of the best places you can find reliable, real-world prices:

In any of the above websites, remember that sellers can ask any price – please compare actual bids to get an estimate of what price your gun might fetch.

Most guns are worth a fraction of what a newer model would cost – much like a used car. The price of your gun will be determined by its rarity, market demand, accessories and overall condition.

There are exceptions to this – specifically guns which are no longer in production or which have a rare quality. Some guns which feature combat or other service markings, are highly desirable. Most gun stores have multiple gun smiths onsite which can provide an expert opinion as to the rarity and condition of your gun.

Transporting my gun for sale

When transporting your gun, safety is first, second and third.

First – Make sure the gun is UNLOADED

Most guns have a removable magazine or an internal chamber for holding ammunition.

Second – Leave the Ammo at Home

When selling you gun, do not bring the ammo. We know how guns work and seldom shoot them in gun stores (joke). But seriously, just bring the gun and leave the ammo.

Third – Cover It. Even A Brown Bag Will Do

For safety, it is always best not to announce to the world that you own or are transporting a firearm. There are uninformed people which may be startled by the sight or perhaps criminals looking for inventory to sell on the black market.

While a padded gun case is best, anything to cover or conceal the gun is highly recommended.

For best practice, put your gun in the trunk of your vehicle. Nothing adds stress to your day like being pulled over for a speeding ticket and telling the officer you have a bag full of guns in your lap. Honestly, it will probably add quite a bit of stress to the officer as well.

For everyone’s sake, keep guns in the trunk. And if you have locks for your gun(s), put those on before you leave home. Travel directly to the gun store and do not leave your car unattended in a public area. Stolen guns are everyone’s problem.

Did you have any more questions? Please let us know and we will be happy to answer anytime. Thanks for reading!

Best Leather Holster I have found 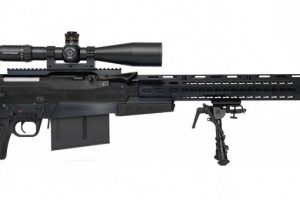 What is an Assault Rifle? Wikipedia’s definition of a assault[...]